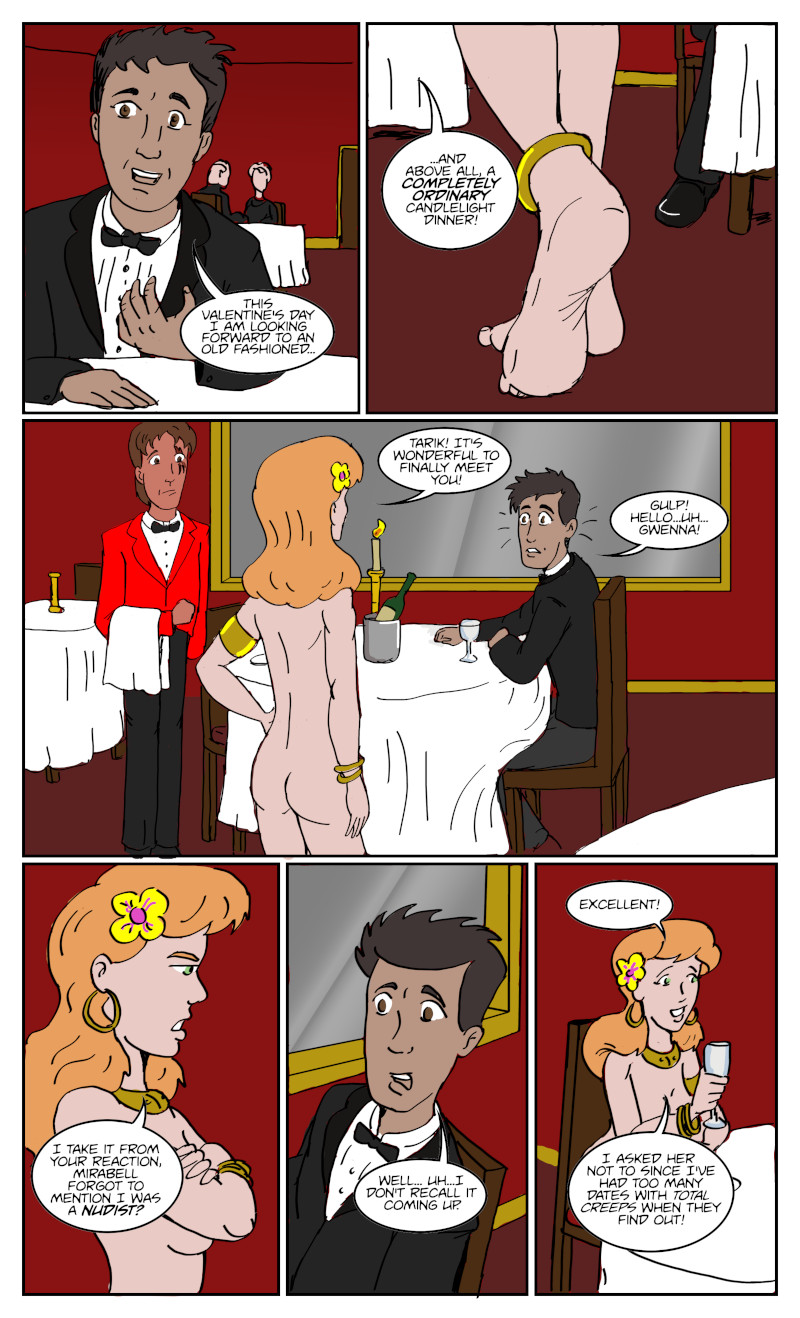 One of my self-imposed rules for uploading fan art here is that stuff for the ComicFury Crossover Exchanges (both art drawn by and for me) is exempt, even though in the past there have been some pieces that I liked really quite a lot.

Today I will be breaking this rule though.

For the Valentine's Day 2021 Crossover Exchange, my crossover assignment was Kaza's Mate Gwenna by Jay042.
Jay then "responded" to this this by drawing a comic page that continued the story of Gwenna's and Tarik's date - and I figured since his page wasn't strictly speaking a part of the official Crossover Exchange, it counts as "normal" fan art, and it's thus eligible for being uploaded here. :-)
Furthermore, I added my original Crossover Exchange page for providing some context. (Thus breaking my rule!)

Also, besides Gwenna and Tarik, there's a special guest star here: Hizruk from Serpents of the Old Nature as the garçon waiter.
(HeSerpenty, the author of said comic, is usually the host of the Valentine's Day Crossover Exchange, but wasn't able to participate at all this year. So I thought that one of her characters should at least get involved in the whole proceedings somehow!)

Oh, and within the main continuity of my comic, this is non-canon. (Like most of my Crossover Exchange pieces. More about that later...)
For a canon crossover between Kaza's Mate Gwenna and Cryptida, see the story starting here! ;-D
User comments:
lirvilas 18th Feb 2021, 12:55 AM
edit delete reply

Yep, it's almost hard to tell where my page ends and Jay's begins! ^^

Also, there were originally supposed to be more cameos as restaurant staff members than just Hizruk! (One idea was Donna as the person who welcomes the guests and leads them to their seats. Is that an usher, or are they only called that in cinemas?)
But then it just didn't feel right to drown the one character from the comic I was actually assigned to in a ton of other cameos (especially since Gwenna would only appear after some time). So I cut down the cameos to just one, and the choice fell on Hizruk for the reason outlined above.
Post a Comment